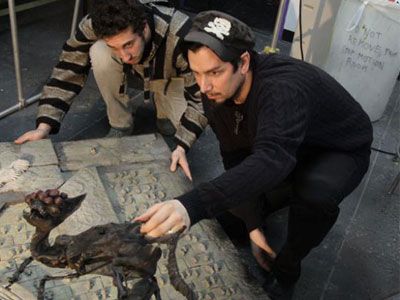 Welcome to the screening room! Below you can see some of Voltaire's "Chimerascope" short, stop-motion films that pick up where his station IDs for MTV and Sci Fi Channel left off.

Voltaire describes the series thusly, "They are each about a minute long, animated in stop-motion animation and narrated by a singer. Moreover they each have a title that sounds like it could be a disease of some sort. These films have a dreamlike quality. The are intentionally short to give the viewer just enough time to take them in, but not enough time to truly examine every detail. The goal is to recreate the feeling a dreamer has upon awakening, when the dream is fresh in their minds but quickly fading. There is the sense that one has seen something fantastic, but one struggles to remember the details. The process employed in making the films is also tied to the surreal, allowing the animation itself to take shape in a stream of consciousness. Often, key plot points are conceived of on the spot, in the delirium of sleeplessness, in the wee hours of the morning after animating for hours. And lastly, the narration, unlike in most films, is written after the film is finished. It is based on what the visuals subconsciously suggest."

Narrators involved in the Chimerascope series so far include Deborah Harry of Blondie, Richard Butler of the Psychedelic Furs, Gerard Way of My Chemical Romance and Danny Elfman.

You can see the first four films below:

A mummified cat is tormented by the skeletons of past meals.

Voltaire takes a dark look at holiday gift-giving and the negative effect it has on the Earth in this one and a half minute creepy Christmas parable.

2009-Official "Warm Up Film" of the Terror Film Festival (screened at the beginning of every screening block).

A T-rex recalls a relationship gone wrong with a Pterodactyl in this prehistoric postcard.

More videos coming soon.  In the meantime, you can see the entire collection at: 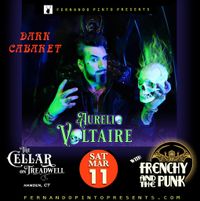 Aurelio Voltaire in New Haven, CT at Cellar on the Treadwell!

Aurelio Voltaire in Knoxville, TN at The Concourse 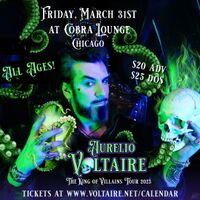