A Requiem for the Goblin King

Aurelio Voltaire’s 13th studio album, The Black Labyrinth, is a 20-song musical inspired by the 1986 film Labyrinth in which David Bowie played The Goblin King.

Conceived as a tribute to his musical idol after the death of David Bowie, Voltaire recorded the album with 15 members of Bowie’s band from nearly all eras of the Starman’s career, (from the pianist from 1972's The Rise and Fall of Ziggy Stardust and the Spiders from Mars, to the sax player on Black Star, Bowie's last album) this 20-song musical imagines a fantasy world after the death of it’s figurehead, allowing Voltaire to explore themes of hero worship, wanting to become one’s idol and how to persevere through depression when that idol (or a loved one) dies and all seems hopeless.

Just some of the Bowie band mates that appear on The Black Labyrinth include Mike Garson, Sterling Campbell, Gail Ann Dorsey, Earl Slick and Mark Plati (producer of the 1997 Bowie album, Earthling and the post humus album, Toy)  who also mixed and co-produced the album alongside Voltaire and Tom Gardner of Rift Studios in New York City.

Truly his magnum opus, this is Aurelio Voltaire’s most ambitious work to date. The Black Labyrinth features bombastic orchestral moments, soaring choirs and a cadre of international musicians playing everything from the expected horns and strings to erhu, marimba, bagpipes, hammer dulcimers, recorders and Japanese taiko drums. Drawing influence from not just Labyrinth but also from other fantasy films of Voltaire’s youth (The Dark Crystal, Never Ending Story, The Black Cauldron, etc) The Black Labyrinth is an imagined soundtrack to an epic 80s fantasy adventure that never was.

The rock songs that appear on this release intentionally draw from Bowie’s later 70s and 80s sound (the period in which a teen-aged Voltaire first discovered Bowie) featuring many of the same musicians who played on Let’s Dance and Glass Spiders-era hits.

Rounding out the album are Voltaire’s more familiar “dark cabaret” offerings such as The King of Villains, Kill the Beast and No Honor Amongst Thieves which, with their dark sound and acoustic instruments, bring to mind classic Voltaire hits such as When You’re Evil, The Night and Stuck with You (viral hits from the animated videos of Daria Cohen’s Vampair series, with a combined 71 million views on Youtube).

Aurelio Voltaire, who is one of the leading figures in the dark cabaret genre (as well as the goth, geek and steampunk worlds) is known by many for his songs for the Cartoon Network show, The Grim Adventures of Billy and Mandy (Brains!, Land of the Dead). He is also known for the Gothic Homemaking youtube show he creates and hosts on his channel www.youtube.com/thelairofvoltaire. The New York Times recently did a feature on Aurelio Voltaire and his show calling him “The Martha Stewart of Macabre Homemakers” and “A lifestyle guru to people who embrace the spookiness in all seasons”.

The Black Labyrinth is slated for a December 16th release.

Scroll Down to Hear The Album!

Out now is Aurelio Voltaire's 13th studio album, "The Black Labyrinth," a 20-song musical opus inspired by the 1986 film Labyrinth, in which David Bowie played The Goblin King.

Voltaire recorded the album with 15 members of Bowie's band from nearly every era of the Starman's career.

Also on board are members of My Chemical Romance, Trans Siberian Orchestra, Vision Video and many more.

An illustrated version of The Black Labyrinth is slated for release in 2023, illustrated by gothic fantasy artists Abigail Larson, Iren Horrors and DreaD Art.

Aurelio Voltaire, one of the leading figures in the dark cabaret and goth genres,
is known by many for his songs for the Cartoon Network show The Grim Adventures of Billy and Mandy as well as for his popular Gothic Homemaking youtube show.
The New York Times recently did a feature on Aurelio Voltaire calling him "The Martha Stewart of Macabre Homemakers." and "A lifestyle guru for those who embrace spookiness in all seasons." 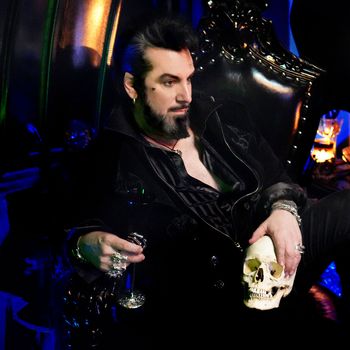 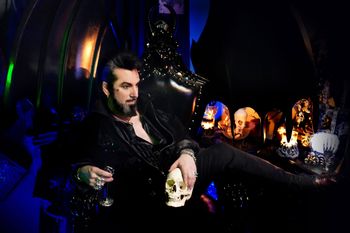 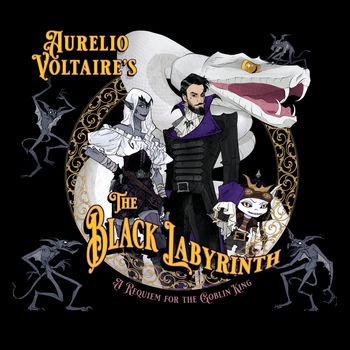 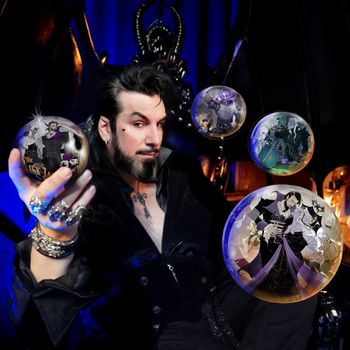 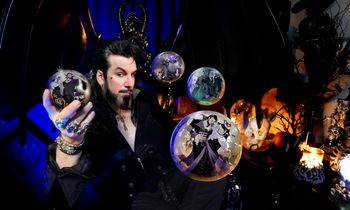 "Aurelio Voltaire pays an ultimate tribute to David Bowie, while also delving into one of his most ambitious and theatrically minded productions yet." ReGen Magazine

"The 20 song release is clean like twilight in a fantasy world brimming with the mystery of a firefly forest and the pageantry of a catholic funeral. Voltaire’s iconic as the ringleader that ties together the spectacle. If you don’t know Voltaire, you have missed one of the most gloriously self aware experiences in the dark scene. If you do you are in for a 20-track journey with one of the great bards of our time. Let goth music be fun. Let it be the giant melting black candle musical theater it was always meant to be. I both teared up and laughed out loud listening to it. You need this album." SoundsAndShadows.com

An internationally touring musician, he is at the forefront of the Gothic, Steampunk and Dark Cabaret genres headlining some of the biggest horror, sci-fi and comic book conventions as well as Gothic and Steampunk festivals for nearly two decades. His music can best be described as a collection of murder ballads, tongue-in-cheek exercises in the macabre, with just enough bawdy songs about Star Trek and Star Wars to keep a sci-fi convention audience rolling in the aisles. Many know him for his songs "Brains!" and "Land of the Dead" from the Cartoon Network show "The Grim Adventures of Billy And Mandy" and for the viral fan animated videos for his songs “The Night”, “Land of the Dead” , “Zombie Prostitute”, "Stuck with You", Raised by Bats" and "Stuck with You" (viral hits from the animated videos of Daria Cohen’s Vampair series, with a combined 71 million views on Youtube).

Voltaire's live shows, whether solo or with his skeletal orchestra, are full of stories and games. Many describe his shows as sitting around a fire while an old friend regales you with tales, presuming that old friend drinks a liter of rum a night, dates zombies and wrestles Krakens.

Voltaire has been recording and touring for over 20 years.  He's released 13 full length CDs.

As a comic book and graphic novel creator in the 90s and early 2000s, Aurelio Voltaire created three different series; Chi-Chian, Oh My Goth! and Deady, the third of which included collaborations with Neil Gaiman, Clive Barker and many other luminaries of the dark fiction world.   They also spawned an award winning animated series on the SyFy channel’s website written and directed by Voltaire as well as over two dozen toy licensing deals.

Most recently, Aurelio Voltaire can be seen in his informative and hilarious Youtube series, Gothic Homemaking. In this show, that can best be described as Vincent Price taking over for Martha Stewart, he demonstrates how to turn your boring apartment into a Gothic lair with the help of a desiccated co-host, Orville Deadenbacher and a bunch of other recurring monster characters.

The New York Times did a feature on Aurelio Voltaire and Gothic Homemaking in October of 2022, calling him "The Martha Stewart of Macabre Homemakers" and "a lifestyle guru to people who embrace spookiness in all seasons".

Gothic Homemaking can be seen at: www.youtube.com/thelairofvoltaire

Aurelio Voltaire's 13th studio album, The Black Labyinth, is a 20-song musical epic inspired by the 1986 film, Labyrinth. Voltaire recorded the album with 15 members of David Bowie's band as well as members of My Chemical Romance, Trans Siberian Orchestra, The Gog is Dead, Vision Video and more!

The Black Labyrinth has a release date of December 16th, 2022 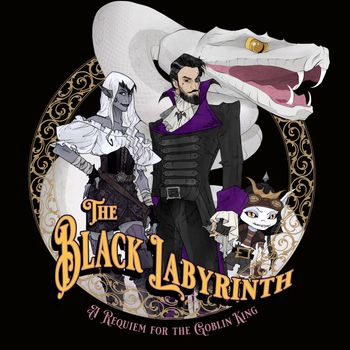 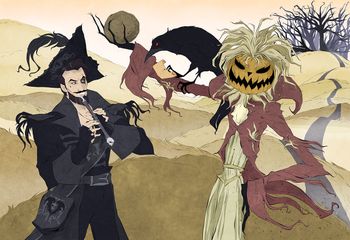 A Song for the Goblin King (Illustrated by DreaD Art) 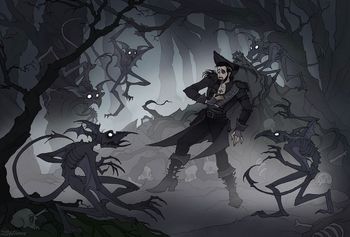 Friends in the Dark (Illustrated by Iren Horrors) 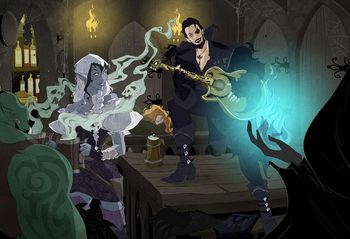 I Laugh (Illustrated by DreaD Art) 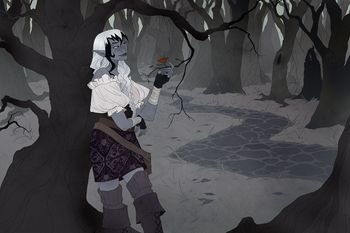 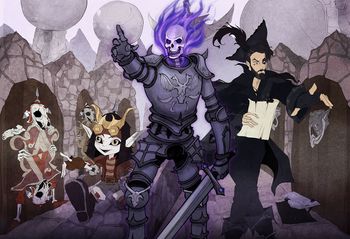 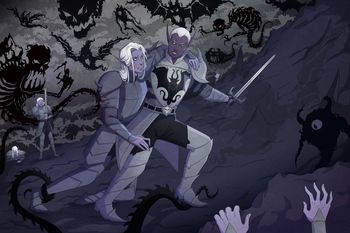 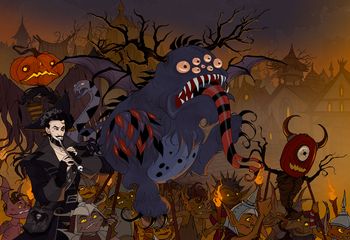 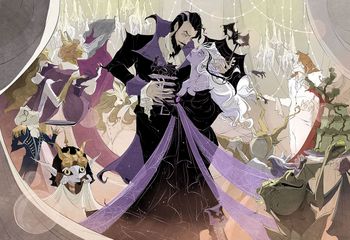 Safe in Your Love (Illustrated by DreaD Art) 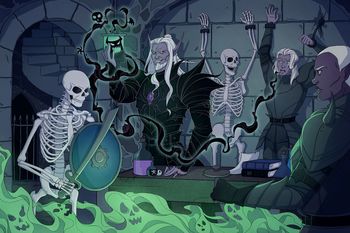 The King of Villains (Illustrated by Clara Martin Merino) 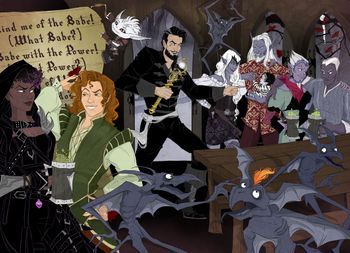