Aurelio Voltaire is a respected authority on Goth, Horror and Steampunk culture and has appeared on various TV shows and documentaries speaking on these subjects. See clips below. He is also an actor who appears in mostly genre films and productions.

His most recent commercial appearance is in this Laphroaig scotch ad:

He has also appeared on the Discovery Channel show "Oddities"

...and this latest appearance on Fearnet!

...and this fair and balanced interview on Fox News:

...and this stint in the IFC documentary, "Goth Cruise":

....and this appearance on the Bram Stoker episode of Biography:

,
Here Voltaire performs and talks about Steampunk on MTV:

One of Voltaire's short films lead to this interview on the SyFy Channel:


Not all of Voltaire's TV appearances have been in a "non-fiction" capacity. Here he acts in two commercials; one for The SyFy Channel and one for the College Television Network.

Aurelio Voltaire in St. Louis, MO at The Crack Fox! 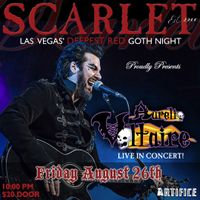